Time to act is now

Year-end tax planning could be especially productive this year because timely action could nail down a host of tax breaks that won’t be around next year unless Congress acts to extend them, which, at the present time, looks doubtful. These include, for individuals: the option to deduct state and local sales and use taxes instead of state and local income taxes; the above-the-line deduction for qualified higher education expenses; and tax-free distributions by those age 70- 1/2 or older from IRAs for charitable purposes. For businesses, tax breaks that are available through the end of this year but won’t be around next year unless Congress acts include: 50% bonus first-year depreciation for most new machinery, equipment and software; an extraordinarily high $500,000 expensing limitation; the research tax credit; and the 15-year write-off for qualified leasehold improvements, qualified restaurant buildings and improvements and qualified retail improvements.

The IRS recently released new tangible property and repair regulations. These regulations are generally effective for the tax years beginning on or after January 1, 2014. As part of the legislation, the regulations provide a de minimis safe harbor which permits the taxpayer to expense tangible property they would normally capitalize. To comply with the regulation and qualify for the de minimis exception, each company must have a written expensing policy in effect before the start of 2014.

The start of the 2014 tax filing season will be postponed by a week or two next year, the U.S. Internal Revenue Service (IRS) said on Tuesday, likely delaying some tax refunds, as well. Complications from the 16-day federal government shutdown are the cause, the IRS said, with the 2014 tax season now slated to start between Jan. 28 and Feb. 4, rather than on Jan. 21.

Desroches Partners, LLP, located in West Houston and North Dallas, offers a complete range of tax, assurance and consulting services to a diverse portfolio of clients. 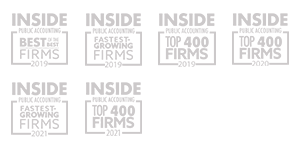