Could this one page lead to a Tax Revolution? 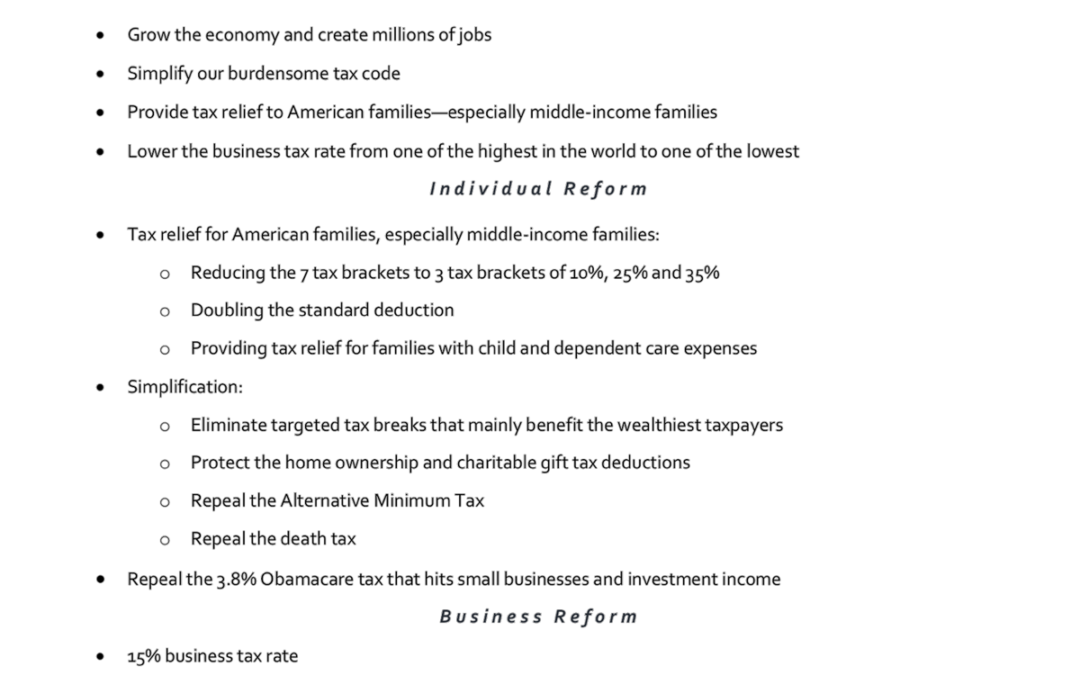 On Wednesday, President Trump outlined his goals and priorities for major tax reform that could have a significant effect on all businesses and individuals. This one-page outline highlights the key features of the proposed tax reform which the administration is labeling, “The Biggest Individual And Business Tax Cut In American History.”

Below are highlights of the proposal which could have the greatest impact on you!

Lower Individual Rates.
The current seven individual income tax brackets are collapsed – 35%, 25% and 10%. While it is not clear what income levels will be associated with these brackets, the brackets will likely result in a tax cut for most Americans. The top bracket is reduced from the current 39.6% to 35%.

Changes to Individual Deductions.
The two most significant proposals would be a doubling of the Standard Deduction and the revocation of state & local tax deduction. All individual deductions except for the deduction for mortgage interest and charitable contributions would be eliminated.

15% Corporate Rate; Also Applied to “Pass Through” Income.
The corporate income tax rate would be lowered from 35% to 15%. The 15% rate would also be made available to “pass-through” income; i.e. income from S-corporations and partnerships that is paid to the shareholders/partners.

“Territorial” International Tax System.
The US would no longer tax income on a world-wide basis, instead shifting to a “territorial” system (similar to most of our major trading partners). There would, however, be a one-time tax on all “offshore” income which has not been repatriated.

See how these compare to the proposals made during his Presidential campaign run.

Desroches Partners, LLP, located in West Houston and North Dallas, offers a complete range of tax, assurance and consulting services to a diverse portfolio of clients.